This colorful plate consists of:

-Side of fresh pineapple

-Pickled jalapeno peppers (they are to DIE for! My mom is a culinary artist!)

This second plate consists of:

It makes me happy when there is a good mix of meats and vegetables or even fruits on my plate. In fact, the best way of consuming fruit is to incorporate it into a meal somehow instead of eating it by itself. The juice of whatever fruit I’m adding to my meal always gives it that extra tang and sweetness without artificial flavors.

This was such an easy little project! I was given such beautiful sets of napkins for my bridal shower and wedding that I wanted to also have a set of pretty napkin rings.

I took 4 flower hair clips, a roll of elastic string and there you have the tropical set on the turquoise. The top 4 metal rings came in a set already but I added a satiny red ribbon for a splash of color and added flourish. Now I just need to look up napkin folding tutorials! 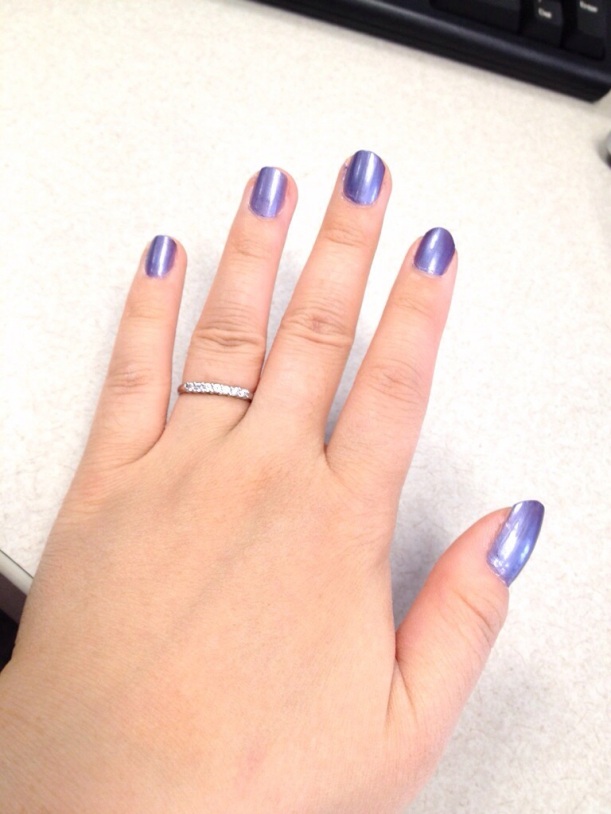 I discovered a great new line of nail polish! Revlon Parfumerie gets an A rating from me! Ratings from other reviewers were mixed but I think they might not have chosen the right scent/shade. Just from the ads, I would have gone with my first choice, China Flower, but I do already down a VS red and a H&M intense pink. So I settled on Moonlit Woods, a lovely metallic slate purple. On webpages, the color looks like a blue base but in person, it definitely leans purple. I was skeptical about the scent (especially nail polish–I mean, they usually smell unpleasant and strong) but I am impressed with the lingering effects! You can slightly smell the scent when you open the bottle but it settles nicely after the polish dries. I brushed this on last night and it’s still smelling beautifully sweet & floral throughout my work day! It lasts longer than even top-notch perfumes.

The consistency is a little thick for my liking, but hopefully that translates to less chipping. It doesn’t brush on very smoothly; you must work with it to get it evenly layered. Two coats of this is definitely enough. I got this on Ulta online at a discount because drug stores sell them for over $6. If you see them on sale, try it out for yourself and pick a fun shade! Whenever I’m cupping my chin or supporting my face with my hands, a pleasant, light scent wafts over from my fingernails. It’s delightful!

I have to share these food pictures I took while on my honeymoon. The food and drink was definitely 70% of the trip that made it delightful. Feast your eyes!

This is a typical breakfast in Paris that I had :). Apricot pistachio tart, raspberry croissant, quiche and yogurt drink. Of course, the hubby helped me eat all this. God help me if I passed by a bakery without purchasing a pain au chocolat. I miss those dearly now that I’m back in The States and the idea of a perfect pastry is just a sugary, messy doughnut :(. Where are the flaky pastry layers? Where is the captivating pure butter aroma? Where is the delicacy?

Oh yes, there was no lack of duck in France. I discovered after 3 days of eating out in restaurants that every menu in Paris basically looked the same. There were only 4-5 entree choices in any given restaurant and veal stew, duck, steak and fries, ham & cheese salad were on every single one of them. We lucked out at the first restaurant we went to and got moules and frites (actually quite popular too). I like that only romaine lettuce was used in salads and as accompaniments as opposed to iceberg. I also liked that a spicy horseradish sauce was present on every table. I got to appreciate mustard very much while living in WI so this was up my alley.

Out of all the duck dishes I tried, I think carnard confit was my fave! The skin was perfectly fried, the meet was perfectly seasoned and falling off the bone and the sensation of biting into the moist but crispy dish was enough to make me swoon.

Now, I HAD to try flan while I was in Spain. Luckily, I found this delectable version at a seaside Mexican Steakhouse restaurant. The dolche de leche sauce was magnificent.

Another fatty moment in Paris :). And look–it’s the pain au chocolate that’s my fave!

I am back from a beautiful and unforgettable honeymoon! I have never been to Europe so this was a fresh and magical vacation for my senses as well as incredibly romantic. Here I am at dusk under the Eiffel Tower on the first night we got in. My overall impressions of Paris:

-Impressively clean for a big city! The metro system was great and I hardly ever saw trash or smelled sewage on the streets.

-The bakery smells! I could seriously eat croissants and those flaky pastries all day…food post to follow after this one ;).

-If you make any attempt to speak French first and then ask whatever else you want in English, the natives were all very nice and helpful. I did not get those dreaded cold shoulders I heard so much about.

-LOVED the residential buildings–the streets were in a non-grid pattern so the houses were all in shapes to accommodate that structure. There were beautiful plants and flowers just outside almost every long-windowed apartment.

-Museum tickets and city attractions were not that expensive. They beat American prices everywhere! e.g. NYC’s Metropolitan = $25 and The Louvre = 12 Euros. Even with the exchange rate at 1.4:1, $16 is a deal! 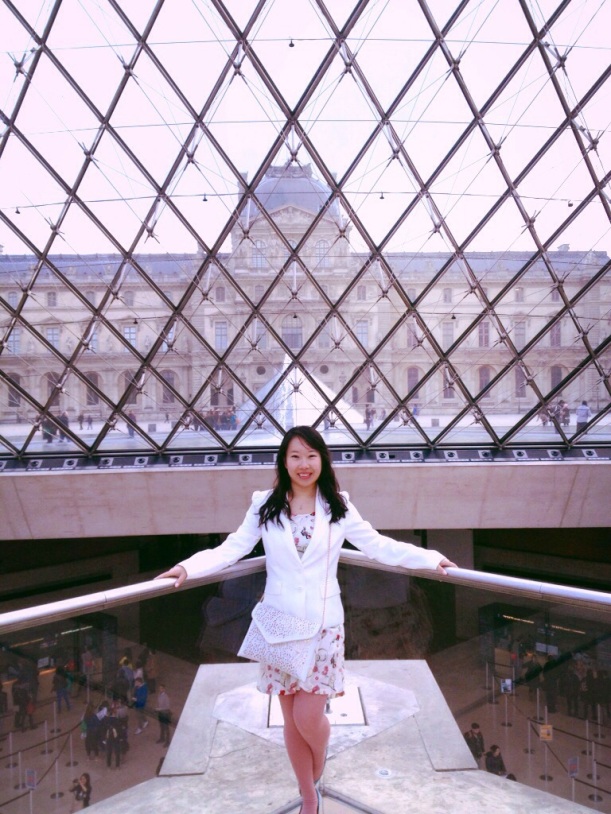 We even made a trip to the Pont des Arts! John and I bought a pink lock, chose a good spot right in the middle of the bridge, and locked it up! Instead of throwing the keys into the Seine, I kept them to make a future charm necklace. I figure that river doesn’t need another piece of rust corroding away… 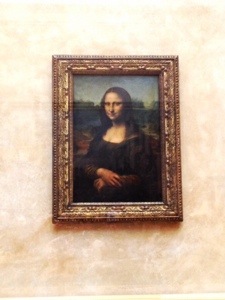 Here is the Mona Lisa in all its 8×10 glory. What a shock I received to see that this famous Da Vinci work was so small! How I got jostled just trying to take one picture. I noticed that pretty much every tourist in a museum always stands at a coveted spot for up to minutes-long and takes several, not one picture. I developed intense hatred for everyone who did that. I made sure to get ONE steady picture on my camera (takes 3 seconds or less) and then scram! 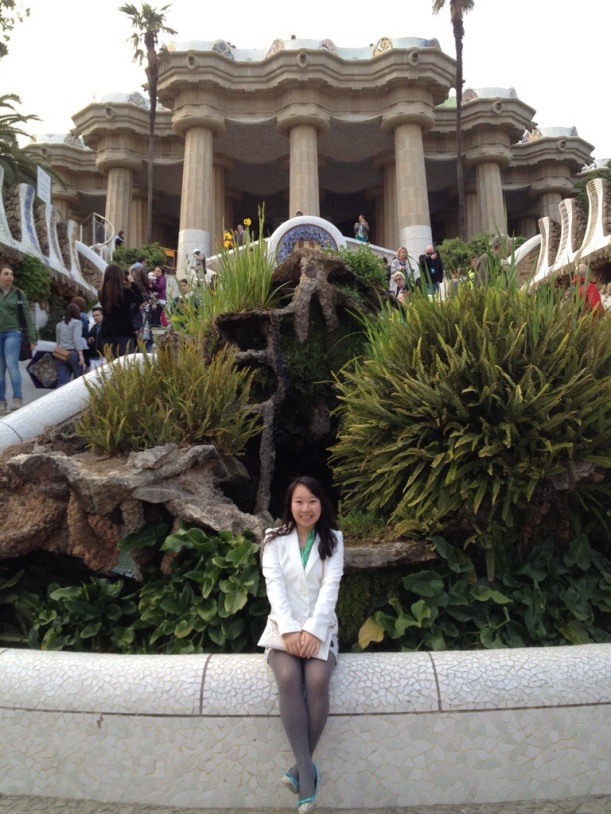 Sweet Barcelona! This is taken at Park Guell where it featured some of Gaudi’s creative works. The mosaics and the adobe-like structures in this park were breath-taking. The scenery on this coastal city was beautiful and unique. The architecture (mostly thanks to Gaudi) was out of this world and the palm trees and interesting fauna added to the charm here. 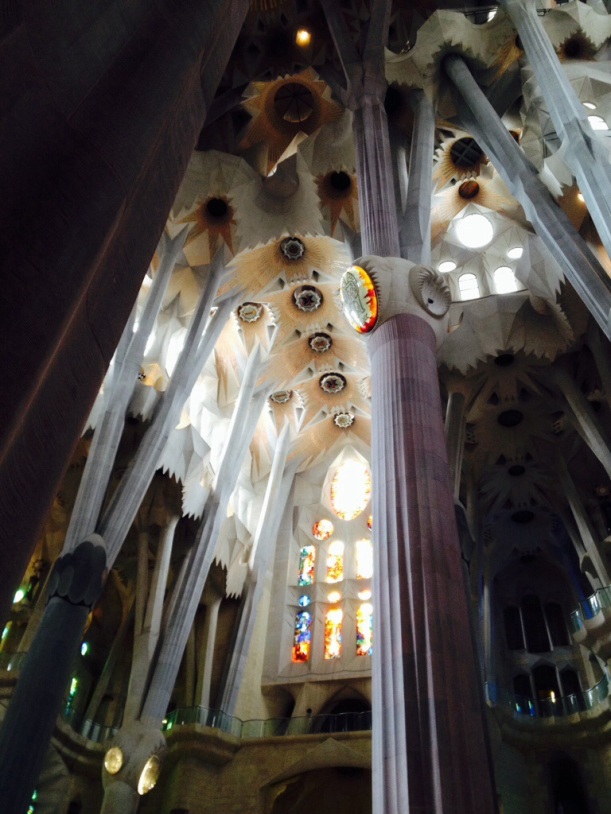 On our last honeymoon night, we spent a whole day in Montjuic, ending with the Magic Fountain show! It’s hard to compare Paris and Barcelona but I have to say, language was a barrier in both cities even though my Spanish ain’t too shabby. Unfortunately for me, Barcelona uses Catalan in writing mainly and a lispy sort of Spanish verbally.

Here’s what I missed about the U.S. while in Europe:

-Free water at any restaurant (waiters hated when we would ask for a “carafe déau” while other times would not understand at all and just get us bottled water or mineral water costing more than wine, lol).

-Public restrooms (there were absolutely none available. You had to be a paying restaurant customer or museum patron. Also, European restrooms were horrendously not up to code–SUPER small, not enough water pressure on the flush, inadequate drying equipment)

-Speedy service in restaurants. In Europe, you must ask for beverages check and make a lot of effort to have the waiter come over).

Here’s what Europe does better:

-No separate tax and tip at restaurants! Your bill comes out to integers and ends up being a lot less! The American system of having employee wages pushed onto the burden of customers is the most retarded rule I’ve ever heard of. Servers should just be able to make $9/hr or $10/hr so tipping would be obsolete and restaurants can TOTALLY afford to pay real wages.

-Better desserts and pastries all around. Mind blowingly good to all the senses.

-Cheap wine! I’m not even a wine fan but at $3 a bottle, it’s hard to pass up some good Pinot Grigio!